Dealing With the South Wind Cabin Heater AD: One Big Problem Has Up To Five Compliance Options. 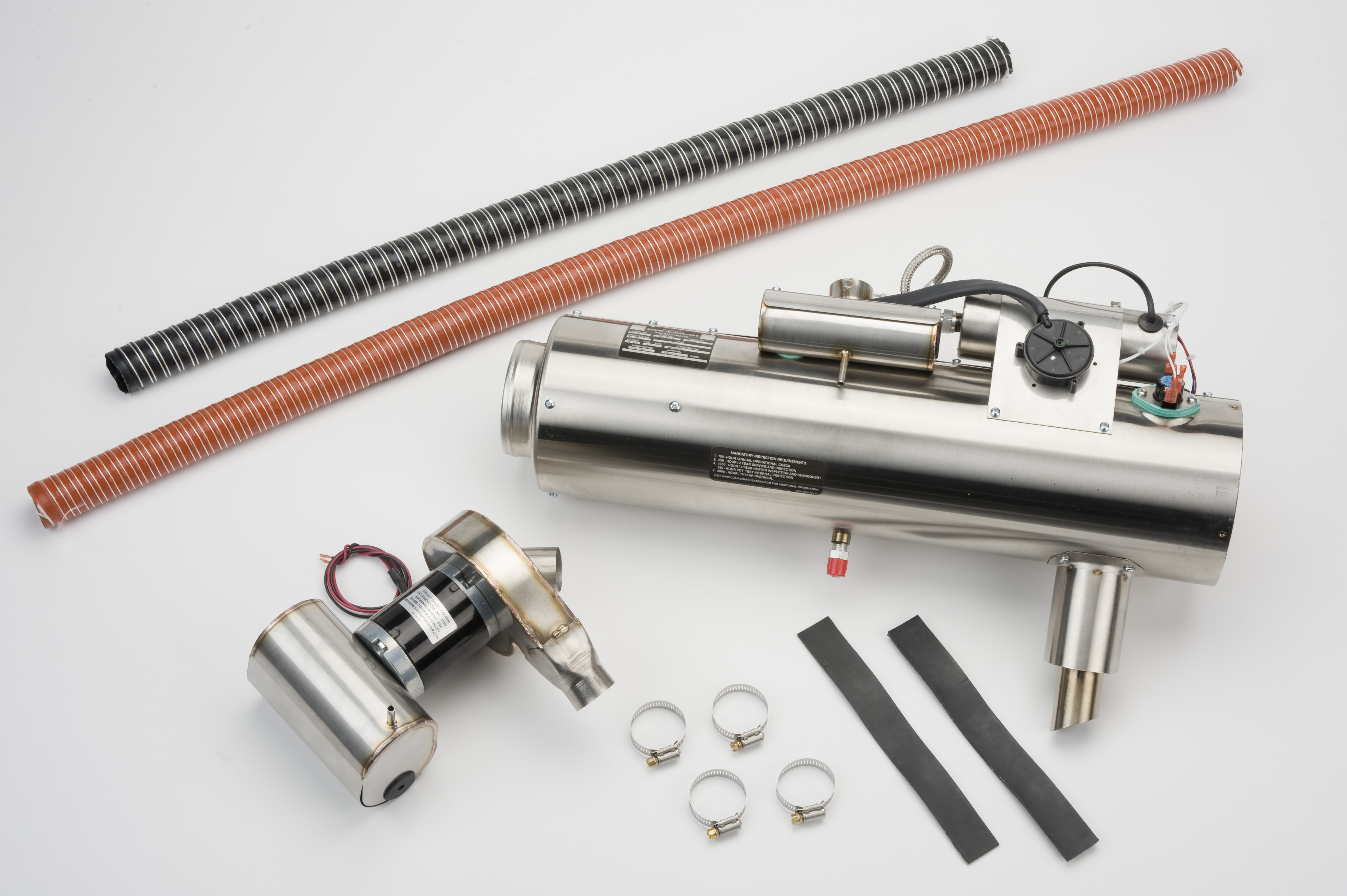 The following article originally appeared in the April, 2018 issue of The Twin Cessna Flyer.

No twin Cessna owner ever wants to hear the term “AD,” but it’s even harder to take when that AD is on their aircraft’s South Wind (formerly Meggitt/Stewart-Warner) cabin heater – a part of the aircraft that many owner/operators only use during a few cold months of the year.

“The FAA estimates that there are over 6,300 aircraft affected by this AD – we think that between the 900- and 8000-series heaters the total is closer to 8,000 worldwide,” explained Keith Bagley, President Hartzell Engine Technologies (HET). “Even if some operators choose to disable their cabin heater, there are still thousands of piston singles and twins that will need to comply with the AD within a very short time. Unfortunately, twin Cessnas are particularly hard-hit by this action.”

“And it’s going to be especially problematic for many owners because not every maintenance facility is set up to do the AD mandated pressure decay test (PDT) on the South Wind unit,” he said. “We’ve created a video of how to properly conduct a PDT and put it on our website. But the fact is, even when done correctly, it’s estimated that 90-percent will fail the PDT and that means the combustion chamber must be replaced.”

By the way, if you’re interested in seeing the HET video of the required pressure decay test you can see it at: www.Janitrol.Aero/SouthWind. 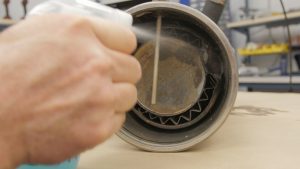 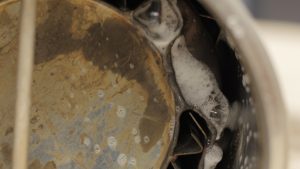 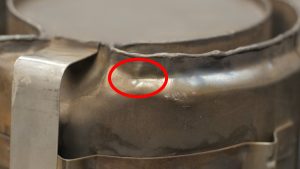 These photos demonstrate confirmation of a crack in the combustion tube crossover area of a South Wind heater using soapy water spray after failing the Pressure Decay Test.

Bagley explained that early on HET recognized that Meggitt had not produced any South Wind heaters in over 25-years and so were not prepared to support the AD when it came out. He also stressed that while the AD does not affect any of the Janitrol Aero heaters produced by Hartzell Engine Technologies, the company is making every effort to help South Wind owners deal with the AD as effectively and affordably as possible.

For example, instead of simply offering AD compliance support for the South Wind heaters, HET has stepped up and has created several options that provide relief from the current AD requirements.

As you’ve probably heard, Hartzell Engine Technologies acquired the assets of C&D Associates in 2016 and that purchase included a line of FAA approved PMA and/or STC’d South Wind replacement heaters. This has enabled HET to offer a replacement option for both 900 and 8000 Series South Wind heaters.

While this is the highest-cost compliance option, replacing your legacy South Wind cabin heater with a brand-new Janitrol Aero unit does provide a host of benefits. For example, it totally eliminates the need for any ongoing AD mandated inspections, which, if the heater is repaired, is required every two- (2) years after the initial compliance. Also, the heater replacement can be done on an exchange basis, minimizing the aircraft’s downtime.

“By the time you factor in the cost of the South Wind heater AD testing and the replacement of the combustion tube, and all the required periodic compliance testing, you are pretty much on par with the cost of our PMA’d Janitrol Aero replacement heater,” Bagley said. “And any licensed maintenance facility can change the heater, which will save the owner/operator the added inconvenience of flying to or shipping their current heater to an approved heater repair facility.”

Bagley said that Janitrol Aero replacement heaters can be purchased directly from HET, or though an authorized distributor. Contact information, and a list of distributors can be found at: www.Janitrol.Aero/contact/.

“Recognizing that a new replacement heater may not be in every owner’s budget, we have worked closely with the FAA to develop an Alternate Method of Compliance (AMOC) for the mandated inspections and repairs to affected 8000-series heaters,” Bagley said. “The AMOC allows for the replacement of the failed South Wind combustion tube with a new design Janitrol Aero combustion tube and a new solid-state cycling switch.”

“We are selling the AMOC kits to select heater repair stations so that they can complete the approved overhaul and upgrade in the field, minimizing the aircraft’s shop time,” Bagley said. “Our 2018 list price for the Janitrol Aero AMOC Kit is $3,495 for unpressurized aircraft and $4,295 for pressurized aircraft – not including installation and overhaul labor.”

“The AMOC represents a viable and affordable option to upgrade their heater that is not only safer, but relieves owners of the ongoing costs of repetitive AD compliance,” he added. “Each of these biennial inspections will cost around $2,000, so it’s something most owners will want to avoid.” 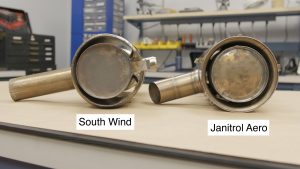 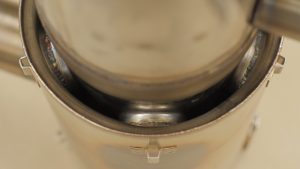 Bagley also explained that Janitrol Aero has accumulated a number of serviceable South Wind cores and is beginning to apply the AMOC upgrade so they can be held in-stock and sold on an exchange basis for AD affected South Wind heaters.

“This is really just a completed version of the AMOC (Option #2), and like the new heater option, minimizes aircraft downtime,” he said. “2018 List pricing for these exchange units is $5,495 for unpressurized aircraft and $6,695 for pressurized twin Cessnas, plus a refundable core charge of $1,000.

While the first three options are those offered by Hartzell Engine Technologies/Janitrol Aero, there are, of course other paths to follow for AD compliance. I did promise you five options after all.

Of course, you can simply comply with the FAA AD as it is written. Any qualified heater repair station can perform the AD inspections and replace any failed components – assuming you can find them.

Using this option, you can, if you’re lucky enough, comply with the AD for around $2,000. So it’s clearly the cheapest way out, but don’t forget that choosing this option will require you to repeat the inspection every two-years.

If you love your twin Cessna and plan on keeping her for a long while, that can add up to some serious money in just a few years. Besides, it really doesn’t do anything to add value to your beloved should you decide to part ways in a couple of years.

Aside from the ongoing cost, this option also does nothing to solve the underlying problem with the South Wind heaters that lead to the AD in the first place. And isn’t that what you want to do?

Because of this issue alone, the folks at HET aren’t big supporters of the repair option. But, according to Bagley, they’re not going to leave you out in the proverbial cold.

“We are endeavoring to help South Wind operators who choose this option with ongoing support,” he said. “Since Meggitt was not interested in supporting the line, we purchased the assets from them late last year and have recently received TSO approval from the FAA to produce replacement parts for South Wind heaters.”

Bagley said that the company is currently integrating the original design data to determine which parts they will be producing. HET is also looking at way to improve the maintenance support for the South Wind line so that owners who choose to keep them will finally be able to receive the attention they need.

Of course, you can always choose to skip any of the first four options. You can just render your heater “inop” and move to south Florida. This option certainly won’t cost anything. But, sure as you do, there will come a winter’s day when you have to fly north and it’s going to be cold – really cold.

And while it may seem fine to put on gloves, two pairs of socks, a parka and whatever else, do you really want to have your passengers suffer through all that and still be cold? If your wife ever flies with you the answer is a resounding no.

The Great Debate: Is It Better to Repair, Overhaul or Replace Your Aircraft's Legacy Starter and Alternator?
Previous
Changing the Flow: How a Small Change Makes a Big Improvement in our Fuelcraft Aircraft Fuel Pump Performance
Next

Products • November 21, 2016
The Great Debate: Is It Better to Repair, Overhaul or Replace Your Aircraft’s Legacy Starter and Alternator?
Read